Male adoration and infatuation takes two forms in Claude Sautet’s love-triangle serenade, starring Romy Schneider as the woman unable to choose between a passionate entrepreneur and an aloof artist. Both are obsessed with her, but show their interest in different ways.

Sautet’s set-up is simple: divorcee Rosalie (Shneider) is with César (Yves Montand) a boisterous, successful scrap-metal dealer. He’s the kind of man who drives fast, thinks fast and probably loves a little too fast too. We’re led to believe that Rosalie is impressed by César and is no doubt attracted to his energy.

Then David (Sami Frey), a past lover, turns up. He’s a comic-strip artist: delicate and handsome in a 1970s blow-dried kind of way. He’s a little cold too, and doesn’t say much. In a quiet, persistent way, he makes it very clear to Rosalie that he still loves her. With elegance, Rosalie reaches out to David and reconnects with him.

Sautet’s genius in presenting male psychological response to desire unfolds. Like Stéphane’s (Daniel Auteuil) repressed emotions in Un Coeur en Hiver (A Heart in Winter) and Mr Arnaud’s unspoken obsession (Michel Serrault) in Nelly et Monsieur Arnaud, César’s response to Rosalie is equally detailed. César is scared because he is in love. As a result, he is inconsistent. In other words, he is wholly human. César may be an oak tree, but there are bullet holes in his trunk: he’s hurt and he’s desperate and so reacts with a mixture of seduction, violence and jealous outbursts. These outbursts are directed at David and also, to his regret, Rosalie. 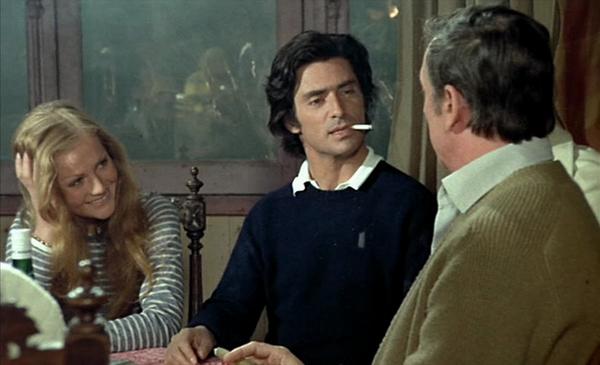 All the while, Schneider‘s Rosalie reacts to César’s temper and David’s seeming indifference with saintly patience. Shneider delivers her lines with the freshness of flowers pulled fresh from the ground. Her beauty is marine and her serenity places her firmly on an island. This makes Rosalie resilient: she wants both men, but needs neither.

Rosalie takes her strength from her siblings, her mother and her daughter, with whom she lives in a large, rambling house. The domestic scenes are convincing. The viewer could be a cat, sitting in a room’s doorway, watching warm chaos play out. It’s worth noting that nineteen year-old Isabelle Huppert plays Marite (Rosalie’s sister). It’s one of Huppert’s first film roles, onto which she impresses her characteristic chilly and intense regard.

Despite his short fuse, César is intelligent enough to conclude that if he wants Rosalie to be happy and not leave him, he must tolerate the presence of David. And so César seeks out David and invites him to stay at their summer beach house in the Vendée. Here, Sautet treats us to a blustery ‘male bonding scene’: David and César sporting identical mackintoshes, stiff and toy-duck yellow, on a boat, sailing a choppy sea.

Rosalie appears at peace with the situation but then makes the decision to leave. The voiceover explains: ‘so she can rely on herself and trust time.’ Her two men are confused, yet their friendship strengthens.

Sautet expresses a certain cinematic wisdom about relationships. There is no moral code: it’s just about getting along together. César and Rosalie break the rules, and a new love is created. It’s a distant star, even in this present day, and it’s Shneider’s Rosalie that controls its brightness.

One Response to César et Rosalie