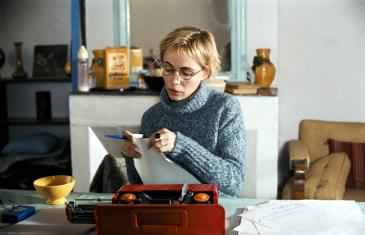 Love is a crashing symbol (and fidelity a distant drum-roll) in André Téchiné’s film about desire, control and the outbreak of the AIDS epidemic in mid-eighties Paris.

Sarah (Emmanuelle Béart) finds motherhood difficult: it’s hard to write with a young crying baby in the room (although easier with ear-plugs) and the father, Mehdi (Sami Bouajila) is a hard-working cop. Faithfulness isn’t important to Mehdi and Sarah, just love, and in Les Témoins the two have the boundaries surrounding their mutual agreement pushed to the limit.

Meanwhile, Sarah continues to write despite her turbulent relationship and the demands of her (unnamed) baby. Creativity also flourishes in Julie (Julie Depardieu), Manu’s slightly nervous sister, who has just landed her first big role as an opera singer. Elsewhere, Téchiné casts a grey shadow, one that eclipses the joy. HIV is discovered world-wide and Manu is diagnosed. He is affected quickly and begins the descent. Around him, Sarah, Mehdi, Adrien and Julie, respond with fear, anger and compassion.

Téchiné asserts a visceral energy, one that is true to the passion and surprise experienced by the characters. Béart performance balances pragmatism with depression and hurt, while Mehdi’s frustration and anger reveals a humanity seldom seen in the on-screen working-cop. The trauma increases Sarah and Mehdi’s bond and takes them into a new land: one that‘s optimistic and broadened by genuine love.