Troubled love on a melancholy Seine, angst on open boulevards, and the clashing of enquiring minds in cafes: for decades French film-makers have shown us Paris through the lives of its inhabitants.

Parisiennes is different because it shows us the capital through the eyes of a Japanese woman.

Directed by Slony Sow, Parisiennes (which won the ‘Best Foreign Film’ award at the Reno Tahoe Film Festival in the USA) follows Kyoko (Eriko Takeda), a young Japanese writer who is in Paris for just a few days. While searching for a muse to inspire the main character of a book she is writing, Kyoko encounters numerous Parisian women, including a homeless person, a stylist, a public toilet attendant and an opera singer.

Sow’s first feature film was shot after the acclaimed short Winter Frog, a simple story about a Japanese woman who helps a viticulturist (Gérard Depardieu) to mourn the death of his wife. Also starring Takeda, Winter Frog screened at 350 film festivals and won 37 awards.

In both films, there is a meeting of French and Japanese cultures: an elegiac understanding of each other, of difference and of themselves.

I met Slony and Eriko in a café Paris around the corner from the Place Vendôme in the 1st arrondissement. We spoke about the swift making of Parisiennes before the 2015 attacks, Eriko’s experience of Paris and the illusion of liberty.

HVK: Why did you choose to show Paris through the eyes of a Japanese woman as the lead character, instead of a Parisian?

Slony: When Eriko first came to Paris her head was full of clichés. She thought every Parisian was like Coco Chanel. For me, the Japanese delicatesse is a good drama. The culture shock creates a good story. The Japanese are so outside the ‘accidental’ way. They are not spontaneous. In France we are very spontaneous. If you want to say something, you say it, even if it is sometimes better to keep your mouth shut. The Japanese are reserved. It is very difficult to know their thoughts.

HVK: In Parisiennes, Kyoko meets characters not normally represented in cinema. Was this a conscious decision?

Slony: I am Parisian and grew up in the western part. Throughout my life I have lived in every arrondissement. It’s my city. When Americans make movies about Paris it is always a cliché. They show it as romantic and glamorous, like Woody Allen’s Midnight in Paris, which is very much his imagination of Paris. I love that film but I couldn’t make a movie about that.

Parisiennes is about the women I know, many of whom represent my mother, my sister, my friends. All the women in Parisiennes live here.

HVK: To what extent are the women in Parisiennes ‘free’?

In Parisiennes the women are like ‘the girl next door.’ When American people think of French women they think they exist in freedom: smoking, speaking loudly, a big temper. It’s a cliché but it is a little bit true.

French society is built by men, and French women pay the price to be independent. I wanted to show this price in Parisiennes. The homeless character is living on the street because of the choices she made in the past. Choices that men, not women, are allowed to make. Certainly, French women have their independence, but it’s complicated. 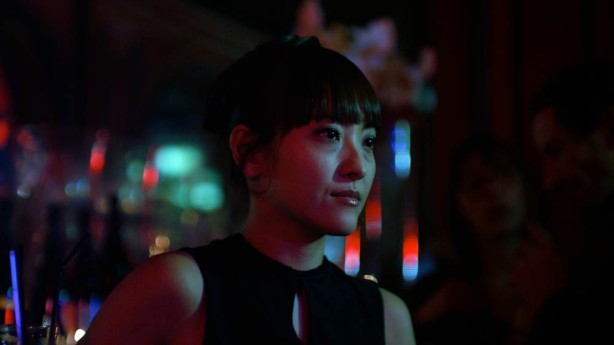 HVK: The public toilet attendant character is interesting. Most people would see her job as a kind of prison, but it is her poetic imagination that gives her freedom. We see this in her surreal re-telling of when she witnesses blood seeping out from under one of the toilet doors.

Slony: To an extent all the characters are like this. The homeless person says it was her choice to live in the street. She says it to convince herself. But it was not like that. In France we say ‘Je me suis fait une legénd’ – ‘I make a legend out of my life.’ She says she drinks so she can see the small details in life. Her poetry gives her freedom, but in reality it is not like this. It only exists in her head.

The stylist is also a fantasist. She is a dominant woman with men. All her relationships with men are so crazy. She’s a surrealist, because she doesn’t like it when the story is simple. She likes drama, plus drama.

HVK: And in contrast to all the ‘drama’ we see Kyoko. Eriko, what version of yourself did you bring to the role?

Eriko: I wanted to represent the woman I was when I arrived in Paris. I had seen so many articles and films about Paris. The reality is totally different.
I arrived in Paris 9 years ago, not speaking one word of French. I couldn’t even say ‘yes’ or ‘no’. It was a total culture shock for me when I met the Parisian woman. I was sometimes frightened, sometimes emotional, sometimes surprised. Very shocked. In a good way and a bad way.

Slony: The people we know are mostly directors and actors. Most of them are crazy people. They fight and they love with big emotion.

HVK: Eriko, what is it like for you observing so much spontaneous emotion?

Eriko: In the beginning I went to many parties and I ended up staying alone until 4am at the corner of the table. I didn’t understand a thing. They talked hard with each other, fighting with each other.

I didn’t like it but I tried to like it because I had decided to live here and work as an actress. I learned that I had to explain my emotions and what I am actually feeling.

HVK: Parisiennes was shot before the 2015 Paris attacks. I imagine it would have been difficult to make now.

Slony: Yes, we shot with little time and without official authorisation. For the scene shot at the Palais Garnier (when Kyoto goes to see Madame Butterfly) we bought just one ticket. We just walked straight into the grand building. I had the camera on my shoulder, and followed Eriko.

I thought if I hid my camera, something wouldn’t work. If you’re confident, it can be easier. The security guard was very happy to let us through, and didn’t ask for a permit. We were lucky because on the same night there was some authorised filming going on at the Opera and they thought we were one of the crew. Only after ten minutes did the director approach me and figured out we didn’t have a permit. But we just carried on for another 30 minutes, and got all the shots we needed.

HVK: Parisiennes took 2 weeks to write and 25 days to shoot on a budget of 30,000 euros. How did you manage to make it happen so quickly?

Slony: I knew that if I waited for the money to arrive from production companies, it would have taken too much time. The project would have died.

HVK: You wanted to work from the heartbeat?

I had friends who were willing to do things for free. The money came, bit by bit. I wanted and achieved a shooting experience that has elements of accidents and improvisations. Just like in life. We had to make do and adapt to the environment all the time.

HVK: Much of the cast comprise your friends, including a number of non-professional actors. How did this affect the shoot?

Slony: It wasn’t hard for me because it is an organic film. If it had been a big film, one which needed a lot of preparation, with big street installations, set locations, and with lots of takes I would have needed professional actors.

But for Parisiennes I needed real life and poetry. If my friends acted badly, it wasn’t necessarily a negative thing. This is because poetry can emerge from mistakes. If you cannot control everything you have to adapt. It is this that is exciting for me.

If you ask a non-professional person to play like a professional you will crash against the wall. It won’t work. They have to be themselves. I asked them to follow me, and to trust me.

Winter Frog is currently being developed into a feature film and will be set in Napa Valley.